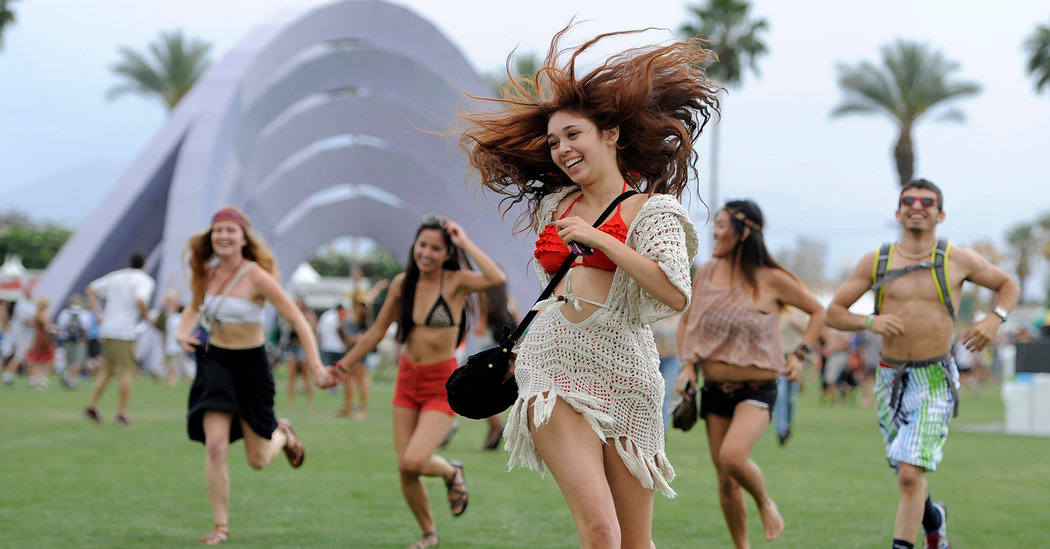 Once upon a time this weekend would have marked the opening days of Coachella, the giant pop festival in the Southern California desert that attracts 250,000 revelers across two weekends. It is the unofficial opening ceremony for a summer run of global music extravaganzas as disparate as Glastonbury in Somerset, England, and the beach parties of Ibiza, Spain.

But now the festival ground, with its distinctive backdrop of bare mountains and towering palm trees, lies empty. Coachella has been postponed until October, organizers confirmed last month, over concerns about the coronavirus pandemic. Scores of other festivals have also fallen off the calendar, leaving musicians without stages to play on, millions of attendees set to stay home — and fashion brands with mountains of unsold denim hot pants, fringed skirts and sequin cropped tops.

“For some brands, festivals aren’t just a season like summer or fall, but the season of the year to build relationships with a certain kind of shopper, who buy fun new extra additions for their wardrobe that they wouldn’t normally be tempted by,” said Lucie Greene, a trend forecaster and the founder of the Light Years consultancy. “They define an entire aesthetic of collections and products for some labels.”

According to Katy Lubin, the vice president for communications at the global fashion search platform Lyst, online searches for “festival fashion” usually begin in March and last until July.

Fast fashion names like H & M and ASOS plan for months in advance of that expected spike, with online shops in place for festival gear. They place vast orders with suppliers for items like neon fanny packs meant for young, predominantly female shoppers who will buy, wear and then often discard looks after two or three days (though not before posting their outfits on social media).

“Unsurprisingly, we haven’t seen that same surge in demand this year,” Ms. Lubin said. The global fashion industry is expected to contract by 30 percent in 2020, according to a recent report by consulting firm McKinsey & Company, with eight out of 10 listed fashion companies in Europe and North America set to be in financial distress if lockdowns last for more than two months.

This time last year, Leonie Hanne, a German fashion influencer who has 2.1 million Instagram followers, was deep in preparations for her upcoming trip to Coachella. Her annual desert pilgrimages (this would have been her fifth) have produced scores of beautiful snapshots, video clips and catchy phrases for previous brand partners like Dior and Paco Rabanne, which she then posted online.

“Alongside fashion week, Coachella was also one of the most lucrative times of the year for me,” Ms. Hanne said from her London apartment this week, forwarding images taken at the festival. In one she posed in a nude lace skirt, pearl bra and face crystals in front of the giant Coachella Ferris wheel; in another, she wore a black feather necklace and flared jacquard pants. This year she was planning projects with GHD, a hairstyling appliance company, YSL Beauty and Jimmy Choo. They have all been put on ice.

Revolve, the e-tailer known for cultivating relationships with social media personalities and reality television stars with huge online followings, generates around 30 percent of its total annual revenue in the weeks up to and around Coachella. The company usually hosts its annual invitation-only #REVOLVE festival near the Coachella site, where frolicking attendees pose for pictures in outfits by brands sold by the platform, generating masses of “likes,” and revenue, online.

“This was our best week ever,” Michael Mente, Revolve’s co-chief executive, said after the festival in 2018. “Monday before Coachella beat our Cyber Monday.”

Not this year. With the festival sales window disappearing alongside customers’ summer plans, some wholesale retailers have moved to cancel orders for products like short playsuits, kimono minidresses and flower crowns. Supplier factories have said that they are being asked by some retailers to give discounts on low-cost garments.

Several Revolve employees, who asked to be anonymous out of fear of retaliation at work, said that, ahead of Coachella, the company had planned to stock more festival-inspired playsuits, dresses and accessories than at any other time of the year. Because of the postponement, however, those orders were now being reduced to a fifth of what had been expected. (The company declined to comment.)

ASOS likewise confirmed this week that total sales had tumbled by 20 to 25 percent since the beginning of the pandemic, primarily as shoppers turned away from party pieces, or what it termed “going out gear,” in favor of clothes like loungewear designed for staying inside.

Given that some events, like Coachella, have been tentatively rescheduled for fall, it is possible that the lockdown measures will be only a short-term blip in the festival fashion business. But after months of social distancing, will festivalgoers want to rush back to crowded venues?

“We’ve already accepted that the first half of this year is going to be very soft regarding sales — that is a given,” said Marisa Hordern, the founder of Missoma, a jewelry label worn by the Duchess of Sussex and Margot Robbie. Ms. Hordern had planned to introduce a new line of bejeweled belts and sunglasses chains at Coachella — exhibitionistic pieces designed for hedonistic moments.

“Our focus has turned to building brand loyalty and community, rather than getting people to buy,” Ms. Hordern said. “That said, the big fear is whether there is a second wave of infections. We can’t carry on as we are now forever.”

Some consumers had already started to re-evaluate their relationship with cheap, disposable clothes before the crisis began. Even if there is a partial recovery in demand, there are concerns that the appetite for nonessential items will be muted in a post-Covid era.

“I am hoping everyone will feel the urge to come together, celebrate and make up for all the missed special moments,” Ms. Hanne, the influencer, said, noting that she plans to return to Coachella in October. “But some parts of our behavior regarding traveling and consuming will definitely change when this situation is over.”