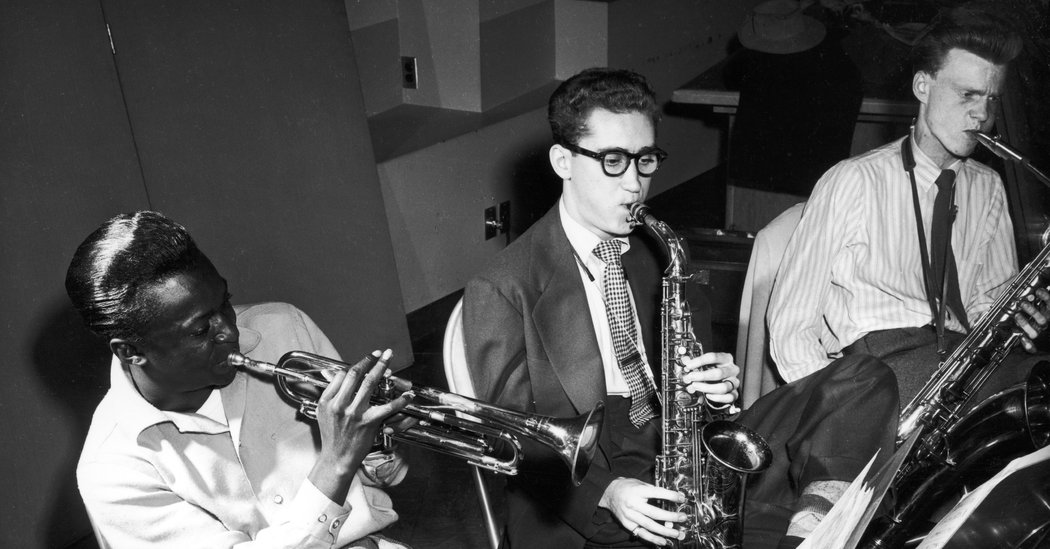 This obituary is part of a series about people who have died in the coronavirus pandemic. Read about others here.

Lee Konitz, a prolific and idiosyncratic saxophonist who was one of the earliest and most admired exponents of the style known as cool jazz, died on Wednesday in Manhattan. He was 92.

His niece Linda Konitz said the cause was complications of the coronavirus. She said he also had pneumonia.

Mr. Konitz initially attracted attention as much for the way he didn’t play as for the way he did. Like most of his jazz contemporaries, he adopted the expanded harmonic vocabulary of his fellow alto saxophonist Charlie Parker, the leading figure in modern jazz. But his approach departed from Parker’s in significant ways, and he quickly emerged as a role model for musicians seeking an alternative to Parker’s pervasive influence.

Where modern jazz in the Parker mold, better known as bebop, tended to be passionate and virtuosic, Mr. Konitz’s improvisations were measured and understated, more thoughtful than heated.

“I knew and loved Charlie Parker and copied his bebop solos like everyone else,” Mr. Konitz told The Wall Street Journal in 2013. “But I didn’t want to sound like him. So I used almost no vibrato and played mostly in the higher register. That’s the heart of my sound.”

Although some musicians and critics dismissed Mr. Konitz’s style as overly cerebral and lacking in emotion, it proved influential in the development of the so-called cool school. But while cool jazz, essentially a less heated variation on bebop, was popular for several years — and some of its exponents, notably the baritone saxophonist Gerry Mulligan and the trumpeter and singer Chet Baker, both of whom he sometimes worked with, became stars — Mr. Konitz for most of his career was a musician’s musician, admired by his peers and jazz aficionados but little known to the general public.

This was in part because of his personality: An introvert by nature, he was never entirely comfortable in the spotlight. And it was in part because of his musical philosophy, which valued spontaneity above all else and often led him to pursue daring improvisational tangents that could leave his less adventurous listeners feeling a little lost. (His way of preparing for a performance, he once said, was “to not be prepared.”)

“My playing was about making a personal statement — getting audiences to pay attention to what I was saying musically rather than giving them what they wanted to hear, which is entertainment,” he said in the 2013 interview, referring to his early struggles to find an audience. “I wanted to play original music.”

His willingness to take chances was admired by advocates of so-called free jazz, which, beginning in the late 1950s, defied established rules of harmony and rhythm. But ultimately no label, not even “cool,” really fit Mr. Konitz; he was best characterized as sui generis.

Reviewing a performance in 2000 for The New York Times, Ben Ratliff called Mr. Konitz “as original a player as there is in jazz” and praised the “boiled-down wisdom” of his playing, noting that “even when he is in the heat of improvisation, it sounds like someone whistling a tune he has known all his life.”

Leon Konitz was born in Chicago on Oct. 13, 1927, the youngest of three sons of Jewish immigrants. His father, Abraham, who owned a laundry, was from Austria; his mother, Anna (Getlin) Konitz, was from Russia.

Inspired by Benny Goodman, he persuaded his parents to buy him a clarinet when he was 11. He later switched to saxophone, and in 1945, with the ranks of the nation’s dance bands depleted by the draft and opportunities for young musicians plentiful, he began his professional career with the Chicago-based band of Jerry Wald.

His first big break came in 1947 when he joined the Claude Thornhill orchestra, whose soft sound and pastel colors meshed well with his playing style. A subsequent stint with the more dynamic and aggressive Stan Kenton ensemble proved an uneasy musical mix but helped spread his name in the jazz world.

The recordings that did the most to establish Mr. Konitz’s reputation were made in the late 1940s and early ’50s, after he had moved to New York, under the leadership of two of the most distinctive artists in modern jazz: the pianist and composer Lennie Tristano, with whom he studied for several years and whose unorthodox approach to improvisation helped shape his own; and the trumpeter Miles Davis, whose short-lived but influential nine-piece band sought to adapt the ethereal Thornhill sound to a bebop context.

Those recordings, and others Mr. Konitz made as a leader in the 1950s, were widely admired by other musicians. But that admiration did not translate into work, and he struggled to find bookings; for a brief period in the ’60s he stopped performing altogether.

He did not find steady employment as a musician again until the mid-’70s, when New York City experienced a small jazz renaissance. He attracted a loyal audience for his work both with small groups and with a nonet that, despite its ambitious repertoire and arrangements, ultimately did not last much longer than the Miles Davis ensemble on which it was partly modeled.

He had a bigger following in Europe, where for the last several decades of his life he spent much of his time and did most of his recording. His European discography ranged in style and format from “Lone-Lee” (1974), on which he played unaccompanied, to “Saxophone Dreams” (1997), on which he was supported by a 61-piece orchestra.

While Mr. Konitz rarely maintained a working group for more than a few months, he performed and recorded as both leader and sideman with an impressive array of top-rank musicians, ranging from the pianist Dave Brubeck (on Mr. Brubeck’s 1976 album “All the Things We Are,” which also featured the avant-garde saxophonist Anthony Braxton) and the drummer Elvin Jones (on Mr. Konitz’s influential 1961 album “Motion,” an experiment in spontaneity recorded without planning or rehearsal) to, in more recent years, the pianist Brad Mehldau and the guitarist Bill Frisell. In 2003, in a rare foray outside the jazz world, he played on Elvis Costello’s album “North.”

Despite health problems, Mr. Konitz continued to perform into his 90s. In recent years he would often stop playing in mid-solo and continue improvising vocally.

Like many jazz musicians, Mr. Konitz often found himself plying his trade in bars and nightclubs where the audiences were less than completely attentive. He professed not to mind.

“Wherever I’m at, I’m happy to have a chance to play,” he told the British jazz writer Les Tompkins in 1976. “People come in and say, ‘How can you work in this noisy little joint?’ I say: ‘Very easy. I take the horn out of the bag, and I put it in my mouth.’ I appreciate the opportunity.”